Jay Maisel – “You are responsible for every millimeter of the frame”.

Jay had me exploring a lot more compositions like this, rather than full frame environmental portraits.

The capabilities of today’s digital SLRs are completely incorporated into Jay’s technical approach to shooting. He shoots exclusively at ISO 1600 to keep the shutter speed high avoiding either camera motion blur or subject motion blur. On the Nikon D3s the noise is pretty imperceptible. I’m not sure that my Canon 5dMkII can quite match the D3s performance, but it is surely acceptable as I too shot at 1600 ISO for the week. He also shoots exclusively with the Nikon 28-300mm ƒ/3.5-5.6G ED VR AF-S lens and he uses the long range of the lens (150mm to 300mm) more often than the short range. He explains “he has telephoto eyes”. When you study his images, you see the pristine compositions that the narrow field of view allows him. When asked if he would shoot in B&W, he smiles and says “I see in color, even when I shot black and white film, I saw in color”.

Day 3 & 4 jumble together in my mind as I have almost no notes in my notebook. We are in a rhythm: shoot, edit, talk, eat, shoot, talk, eat… sleep.

I remember the Nikon reps showing up on Wednesday morning with the new D4 and D800 and several lenses. The gear will be on loan for the class through the end of the week. Being a Canon shooter, I busy myself preparing my images but keep an ear out for something interesting. Jay, like the others, is clearly looking for the keys to deciding between the two. I hadn’t realized that the D800, with its 36 mega-pixels, was actually the cheaper of the two cameras. By the end of the week, however, for all those who tried these two cameras the D4 was clearly the winner for the type of photography we were doing. Learning more about these cameras gave me more perspective on the Canon line. I currently shoot with the Canon 5dmkII – 21 mega-pixels, 3 frames-per-second. Given Jay’s style of bracketing, 3 fps is a bit too slow, so I can appreciate the shot-gun shutter of the D3s (Jay’s current camera) and the D4. I think about the new Canon 5DmkIII with its 6-fps and think again that it is probably in my future.

On Wednesday we had an extended period to shoot –  from lunch through to 6pm – and on Thursday our usual couple of hours. Each day we turn in 5 images for critique. They must have been taken the previous afternoon or in the morning. I’m still a bit disoriented about on which day we critiqued which images. It wasn’t until Tuesday morning that we had our first critique of the images we brought from home. I don’t remember having two critiques in one day, but somewhere we must have doubled up to get through the whole week.

The rules of critique – Jay does not speak unless others do. If no one talks about your image, and you want some feedback, you better start. He used the critiques to reinforce all the things he had been telling us. I can no longer remember the specific images, it was more about a general progression. Are there things in the frame that are not contributing? No, frame them out? Is there something interesting going on? No, wait for the trigger? Lessons on gesture over graphic and the “Catch-22”. Catch-22 is when there is an interesting scene so captivating the interest of the people involved that they never notice the photographer. We also pay close attention to images that receive a “verbal”. That is an image that extracts a immediate verbal reaction from the class as soon as it is shown. We talk about images that make reference to things within the frame and to things outside the frame.

The black matboard cropping tools  get a lot of attention. We are continually asked – what is this part of the image doing for your image? Often Jay will reverse the crop and remind us to look at the part of the image we would be framing out to determining if it was interesting. Usually it was some blob of gray or streak of white. We sometimes made it a little too easy for him to make his point.

Around Wednesday, philosophy begins to give way to brevity – “There’s not a f-ing thing sharp in this picture?”, “Doesn’t this piece bother you?”, and “Why did you include this text?” (Jay doesn’t like text in his image unless it is absolutely part of the story).

Wednesday night will go to the SoHo Photo Gallery monthly Salon and then head to City Hall for dinner. Jay whispers around the table, “get the tuna, get the tuna”. The restaurant had a run on tuna steaks that night. 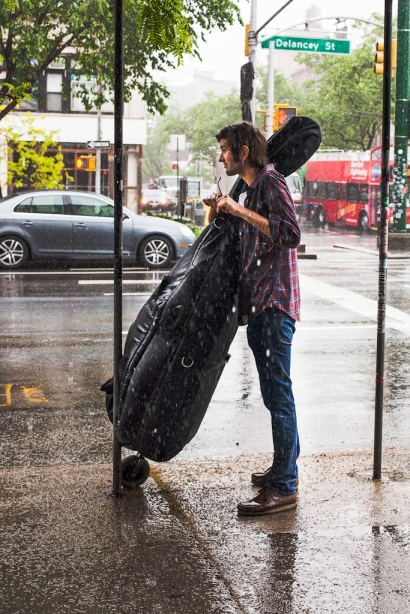 In May, I took a 5-day workshop with Jay Maisel in New York City. Jay made his career as an eminent commercial photography, but now shoots only for himself. The week is designed to open the doors for you to take yourself on a journey as an artist and photographer. Here are my thoughts on Day 2

Day 2 was hard. It was raining. My mind was processing the ideas from Day 1 and all the people I had met. I was in a strange city. The short-acting adrenaline of Day 1 had worn off and I was tired.

Before leaving LA, I was looking forward to the rain we would get in New York. I wanted to get some “rain shots”. We don’t get much rain in LA and this would be novel and exciting. As was the routine, we were sent out shooting after lunch. Out again onto the unfamiliar streets of New York. The open hearted New York life I experience on a sunny spring day on Day 1 had turned to a rushing mad dash of umbrellas. I tried for my “rain shots, but seemingly all I got was wet.

From the beginning, Jay stresses that failure is an option. While we are behind our cameras, we are not business professionals. We are not doctors, lawyers, or accountants. When Jay admonishes, “This is not brain surgery” he does not mean to imply that it is not difficult, he means to imply that, no one will die.

As we grow older, we are expected to become masters in our professional life. We become conditioned that failure is not an option. It is stressed that as a result of our failures people will die, go to jail, get fired, loose money, or be subjected to a myriad of other forms of misery and consequence. As good school children, we are taught to learn from our mistakes in order that we do not make these mistakes again. We become more cautious and take less risk.

Jay’s message about failure is different. Failure is part of the practice and part of the journey. You should continue to fail. If you do not continue to fail you are not continuing to be curious. Failure is the result of taking chances and taking chances results in photography that moves people. Failure can also leads to serendipitous results. “There is nothing f-ing sharp in this image!” could lead to “There are no rules in photography”.

It is difficult to put our egos and professional pride aside and take the chances it takes to come home with a card full of failures. But fail we must. Keep taking chances and keep failing. “It is not brain surgery, no one will die”.

The Faces of Jay Maisel

Who is Jay Maisel: 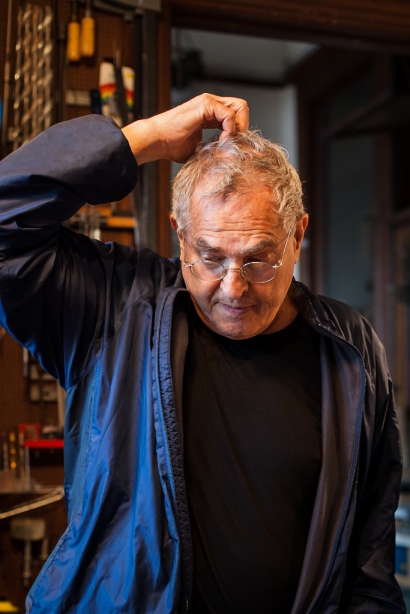 Jay has a way of letting you know when he is telling you something of importance – he keeps repeating it. “Tomorrow I want you up with the sun.” “I don’t want to see you bright-eyed tomorrow.” “Hey Jamie (his assistant), what time is sun rise tomorrow?“. This was the repartee at dinner on Monday night, and besides, we needed 5 images to turn in on Tuesday. We also heard “Doors open at 8:30 – not 8:20, not 8:25 – 8:30“. Kind and gracious, but absolutely not to be fooled with, this was his way of making sure that we were not reliant on him, that we stayed out shooting for a good period of time.

I wake up at 5:45 am (2:45 am Pacific time) to walk the streets of China Town and Little Italy. I have no idea where I am, where I am going, or what I will find. This too, is part of Jay’s plan: Go out open. Jay knows that not every day, every outing, will you find a jackpot, but his philosophy is that you plan what to photograph, and don’t find it, you will get nothing. You must go out looking for interesting things – he uses Light, Color, and Gesture to define interesting. Look  and keep looking. When you find something – wait for the trigger. Work the scene or situation. Then go out open again.

I went out open and returned with an series of images of this Chinese woman sorting the returnable bottles and cans that she had collected that morning. Look at her hands and gestures. Ultimately I decided to focus just on her hands. 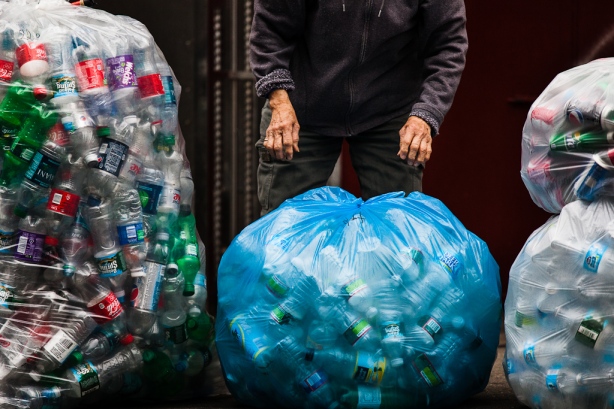