A few days ago I had a total disaster with a roll of TMAX 400 B&W film and Xtol 1:1. The result was bright surge marks on every frame. After reading many opinions that ranged from over agitation to under agitation, I decided that I couldn’t isolate one specific thing that I was doing wrong, but that I needed to really start from the beginning.

Lesson 1: Paterson tanks and reels are the ones you should be using. Let me say this again – PATERSON TANKS and PATERSON REELS!

The tanks I’ve seen are all designed to pour out the sides and refill down the center through a funnel shape. I now understand this approach – pour out fast, refill gently and from the bottom up. Paterson tanks takes this approach one step further with a deep top well, allowing about 1/4 to 1/3 of your chems to come into the top of tank (above the funnel) to be remixed from the bottom up. Even if you are using the tank to its capacity, there is plenty of room for the chems to fully mix during agitation.

Lesson 2. Forget all those super gentle crazy-8 slow inversion techniques – just invert 180-degrees, then back to upright (don’t forget to tap to dislodge any bubbles)

The super gentle crazy-8 and parabolic patterns will not mix your chemicals sufficiently and may even defeat the design of the Paterson tank. You want the take full advantage of the Paterson tank design which allows chems to flow into the top of the tank around all sides and then fill back down the center of the funnel. The only way to effectively do this is to do a quick invert to up-side-down – letting the chems flow into the top of the tank from all sides, then a quick revert back to upright. If you take off the cap, you will notice your chems in the funnel and that it may take a few seconds for the chems to flow back through the funnel. You may want to wait a couple seconds before starting the next inversion. I rotated the tank 45-degrees to start the next inversion.

I can’t say that 1 minute initial agitations followed by an agitation every minute would be better or worse. I can just say that the negs I got were great with this approach. 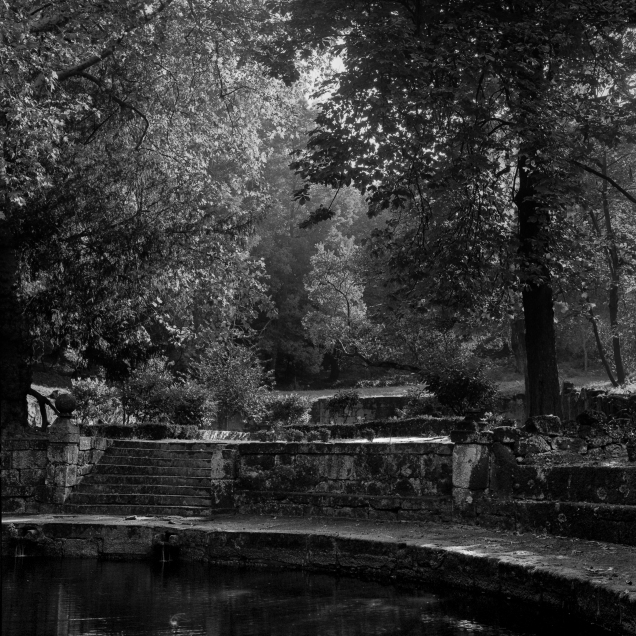 When I showed up in Portugal with a vintage Rolleicord V twins lens reflex (TLR) camera and several rolls of medium format B&W film, Arthur Meyerson, master of color photography, looked at me askance. Of course, I had my usual pack of digital gear centered around the micro-four-thirds system, but with the promise of castles, churches, and gardens, I was hoping to find opportunities to do a little bit of B&W work.

Our visit to Guimares was two-thirds of the way through our 12 day Portugal adventure organized and led by Keron Psillas and Arthur Meyerson. I had almost given up on using the Rollei until I saw these gardens with mossy steps and big over grown trees. It was spectacularly lush. The afternoon we arrived at the Pousada, the light was nothing special though I did get a unexpectedly beautiful sunset-moonset from the window in my room. But the following morning, with rain still dripping from the trees and mist in the air, the sun filtered in in magical patterns. There were several of us photographing that morning and I was the last one out, running so as not to be late for our departure to Porto.

I tend to like my B&W images a little dark and moody, which can make printing quite tricky. I hope you like these. They were a great delight to see come alive as I hung the negatives to dry. [Rolleicord V, TMAX 400]

The Rolleicord V is the low-end of the Rolleiflex line, and this particular model was manufactured between 1954 and 1957. It sports a 75mm Schneider Kreuznach Xenar f/3.5 lens, which I believe is uncoated based on the glow that I see in the highlights of these images. This is a medium format film camera which uses 120 film and the negatives are 6 centimeters (or 2 1/4 inches) square. The camera itself is actually quite small (roughly 4x4x5.5 inches) and light (less than 2 lbs) for a medium format camera. To take an image, you look down on the waist-level view finder and compose and focus a reversed image (reversed, but not upside-down) on the ground glass. This is all done through the top lens, or the viewing lens. The taking lens is just below and contains the shutter. The TLR is a very simple camera which explains why it is still in perfect working condition even after 60 years. 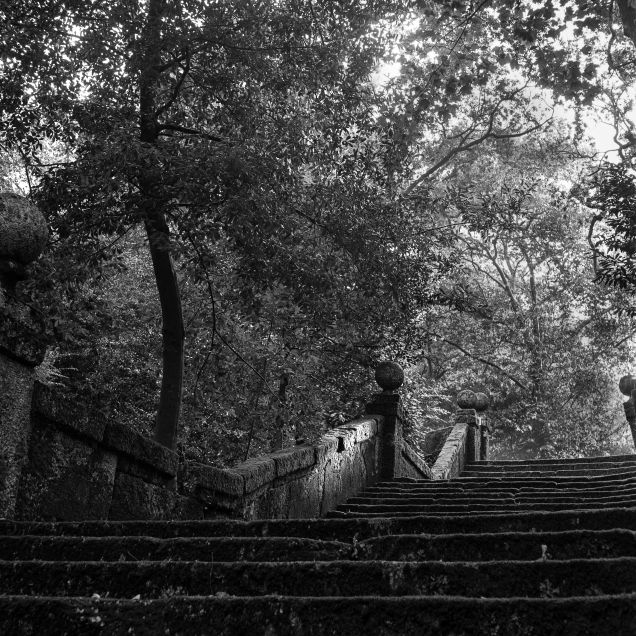 This is the second of a 3-part retrospective of my 2014 photography. In Part I, I picked my favorite images from a body of 35mm B&W film work that I did with my 1962 vintage Leica M2 and Zeiss glass. In Part III, I will focus on my color digital street work. What you will see in Part II is all film, but in a mix of formats and genres. I experimented with large format, medium format, and a panoramic 35mm swing-lens camera (go check out Jeff Bridges photography and the work he does with his Widelux to learn more about this type of camera – yes Jeff Bridges the actor, yes the son of Sea Hunt start Lloyd Bridges, yes I just gave away my age). The medium format cameras (6cm x 6cm negative) were of two different styles, the Hassleblad 500 c/m which is a single-lens-reflex and a couple of different twin-lens-reflex cameras – a Mamiya C220 and a Rolleicord V. The Rolleicord is a low end Rolleiflex but still with great optics.

Early in the year I took a 3 day trip to Bosque del Apache and White Sands National Monument. I am no wildlife photographer and a limited landscape photographer, but I spent this trip mostly focused on medium format landscapes with the Hasselblad. White Sands National Monument is super photogenic and much easier to navigate than the dunes in Death Valley. My favorite from the trip was using a red-sensitive film called Rollei 80s with a strong red filter. 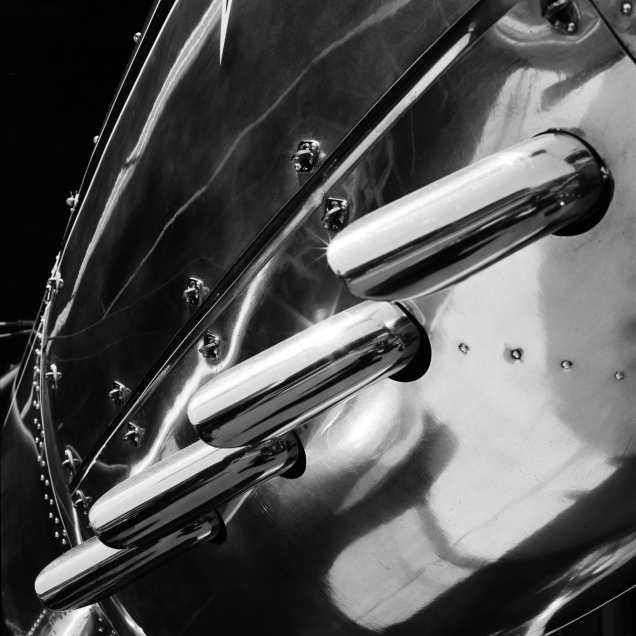 My medium format work is intended to be abstract and simple, an exercise quite the opposite of my street photography. I spent the morning at the Santa Paula Airport, the owners of the vintage planes can avoid certain costs and taxes if they show them several times a year. To support this, the Santa Paul Airport is open one Sunday of every month for the owners to show their planes. This airplane was all chrome. Chrome and B&W just go together. Hasselbladd 500C/M, Fuji Neopan Acros 100.

From May through October, for one Saturday each month, Bodie allows photographers in at sunrise and to stay through sunset (check the Bodie Foundation website, you need to pay in advance). My objective was to use the 4×5 on the buildings, but it just wasn’t working out. I had also just bought a camera called a Horizon Perfekt swing-lens camera. It is a modern Russian version of a camera like the Widelux which you can purchase new through the Lomography store. These cameras take 120-degree panoramas with a 28mm focal length lens that swings from right to left across the scene. It is easy to get barrel distortion so care must be taken to keep the camera level. I ended up really enjoying the use of this camera in Bodie. Here is one of my shots. Horizon Perfekt, Tri-X 400.

Last, but not least, an image which shows what you can do with a twin-lens reflex camera. This was taken with a Mamiya C220 as gifted to me by my good friend Milt Morris. Another reflection with shadow – sort of like my Hollywood Blvd shot in Part 1. The hat is mine, the camera is just visible in the shadows with the window sill. Mamiya C220, TMAX 400.

I spent much of the first half of 2014 shooting black and white film, 35mm street stuff and some medium and large format landscapes and other scenes. Around the middle of the year, I was nervous that I’d not have a 2014 portfolio to show because I was doing so much experimentation with film. Because of this, during the second half to the year I started to shoot more color digital again. In September I was able to focus on my color work with nearly 2 weeks in Portugal with a short stay in Barcelona. For this trip I concentrated on my color digital work.

I’m going to lay this retrospective out in 3 parts:

Here is Part 1, stay tuned for Part 2 and Part 3 later next week.

The year started on film shooting locally at the usual haunts – Santa Monica Pier, Venice Beach, Hollywood, Downtown LA. My favorites in 35mm B&W are a mixture of things I went out looking to shoot and stuff I just found when I had a camera with me. A bit of this was for a project to depict LA in B&W for a group call the Film Shooters Collective. 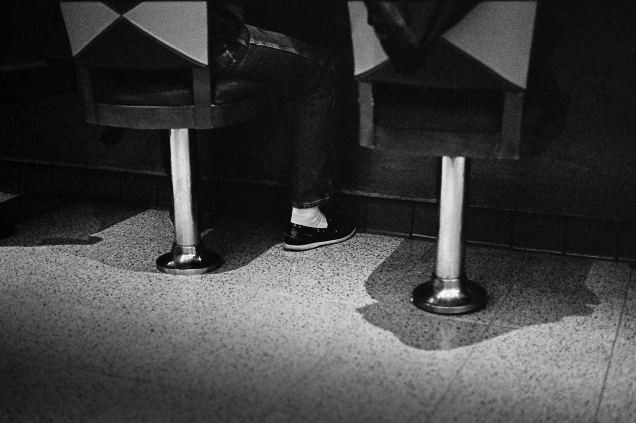 Stop for Clouds – at the corner of Wilshire and San Vicente, West Los Angeles

Chick and I were driving to my friend Jerry Weber’s house, on our way to spend some time shooting down at Santa Monica pier. I looked up out the window and was struck by the reflections of the clouds – a rare sight in Southern California in 2014. I framed up the shot again with the Leica M2 and 50mm lens.

Even in Winter – Santa Monica Beach

Even in the winter, southern Californians head to Santa Monica beach. This was on the same day as the image of the stop-light but the clouds had gathered more thickly. I like the composition of elements with the line of people on the beach on the left and the life-guard house on the right. If you want to know what Santa Monica beach looks like in the winter – this is it. I worked this scene fairly hard with lots of different compositions. For this subject I waited it out to get the gesture and the wind in her hair. 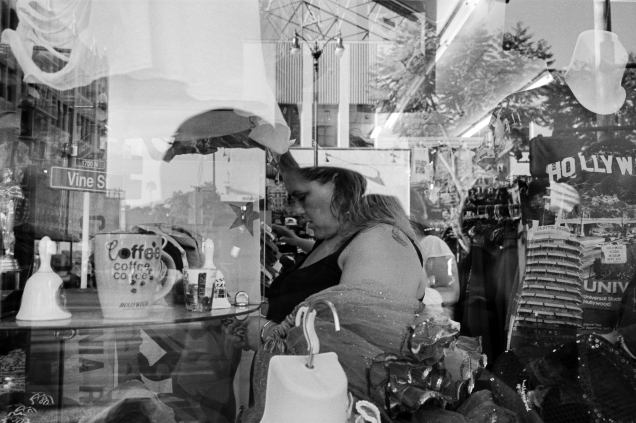 A complex image, to be sure, with a lot to look at. I wasn’t quite sure of this image, it was always one of my favorites but I was never quite sure if it was too complicated for others to appreciate. I like the way you can look all around the image, round and round, and then bam – head right to the center. I also like that it is uniquely Hollywood. I showed this image to Gerd Ludwig at an impromptu portfolio review. It was one of his favorites. Again the Leica M2 and 50mm lens.

When framing up these panoramas my compositional agenda was to look for layers. I tried to bring some object into the foreground while looking for a perspective that aligned interesting items behind it. While looking for this image, I walked all the way around the truck and finally ended here giving each element a place of its own.

Do a search for Bodie on the inter-galactic-web and you will find lots of pictures. Color, black & while, and plenty of HDR. Each time I visit Bodie I want to capture its mood in a special way. My plan for this visit was to take a bunch of 4×5 looking to capture as much detail as I could muster. But I also took along a new toy – the Horizon Perfekt. The Perfekt is a “swing-lens” camera taking a 120º view by, literally, swinging a lens around an axis. It uses 35mm film, but the negatives are about 1.5 times wider. Once I started framing up the area with the Perfekt, I couldn’t stop.